Steve Martin He has almost all the internet going for him against millennials who seemingly don’t find the humor in one of his most famous ‘SNL’ sketches… King Tut!

Here’s the deal… SM’s going because someone reposted and redistributed his famous Egyptian-themed dance he was performing on a late night show, which he featured on regularly in the ’70s. Yesterday marked the 44th anniversary of its debut.

The Steve Martin King Tut video circulates without the monologue, a criminal offense close to defamation. The whole thing is the joke line. If you’re trying to find out if it’s funny, watch this pic.twitter.com/B9bvAmP3mn

While people were piling on the compliments at first, it seemed, one person (and maybe more) asked a simple question… Where is the funny thing about this thing???

As one 20-30 thing note… “I’m sure my parents found this funny in the ’70s, but I honestly didn’t get it. It does a funny dance and voice but there isn’t really *a bit* that my millennial brain can analyze.” Their tweet is going off now…in a bad way. 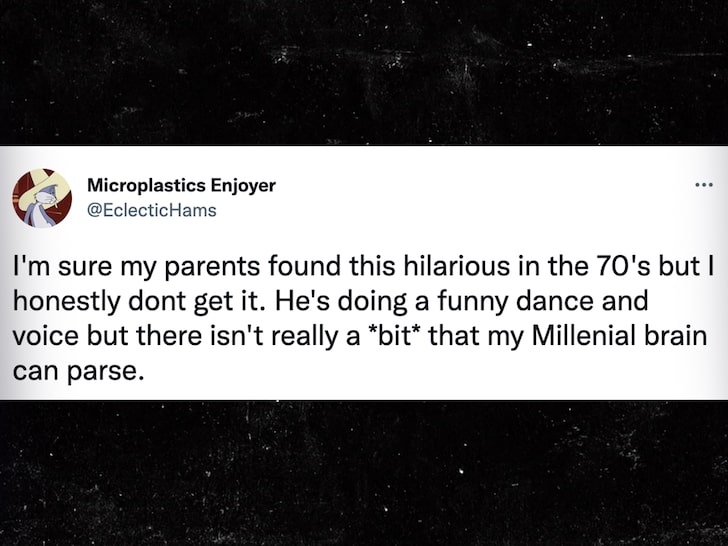 Lots of people come out in defense of Steve against this person’s perception of his own comedic chops – or lack thereof in their eyes – by rightly explaining that he was a pioneer and unleashing a whole wave of mythical attitudes that emerged in the late ’70s and ’80s with his quirky style… Which was more brilliant than the actual traditional contrition lines.

They explain that King Tut’s dance is just one example… The context is also important. There was a massive museum exhibit of the young pharaoh being dragged across the United States at the time…and it permeated the airwaves. So, Steve’s satire here is not lost on those who remember.

I find the current discourse on King Tut by Steve Martin singing a great example of why “You can’t do X today” is such a pointless point. You can’t do King Tut today, but not because he’s abhorrent, but because King Tut’s cultural significance is much less now.

There also appears to be another caravan happening on the outskirts of this King Tut clip – the people allegedly awakened by…cultural appropriation.

Honestly, we can’t find a single tweet that expresses this position at all – Twitter’s algorithm is stinking when it comes to finding the primary outrage being cited – but anyway, some say they see this argument being made…and there’s also Steve’s fans shut him down.

In fact, we’re not about to apply the 2022 lens to Steve and his materials after about 40 years. And most importantly, no one in their right mind would try to “cancel” it now.

But, as to the question of whether or not he’s actually funny — whether at the height of his stand-up or in the movies afterward — well, the answer seems to depend on who you ask…for generations.

It can definitely be brought up for discussion… so we’ll do it here. On the ha ha issue…is Steve Martin actually funny, or does his sense of humor have more inclination towards the game of soccer…and kind of overrated??? Fire up, folks – curious to know how the world really feels about it. 👀